After hearing about it from co-workers and my friends, I finally made my way out to Helium Comedy Club in Downtown Buffalo. My thoughts? Take a look at just what I experienced...

It was one of those bone-chilling Friday nights downtown, wind, light snow and ice made the walk into Helium Comedy Club an adventure of it's own. However, my friends and I were welcomed by heaters, as well as a line of Buffalonians who shared a similar trait with all of us, laughter! Even before the show, I found myself cracking jokes and laughing along with the patrons and staff! 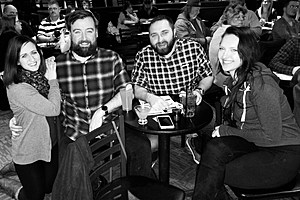 The show I checked out was Drew Lynch, an up and coming comic who was the runner up on the hit show America's Got Talent. We were seated by a very nice waitress, who didn't hesitate to get our drink and food orders in and delivered to our table. The cozy atmosphere, friendly staff, and layout of the room made it quickly known that there was not a bad seat in the house!

After spending hours laughing/crying, enjoying delicious food and drinks, and catching up with old friends, I realized this is a place I need to visit more often. If you're looking for a great pick-me-up, cheap and different date idea, or a reason to get the friends together, I'd highly recommend Helium Comedy Club... See you at the next show!